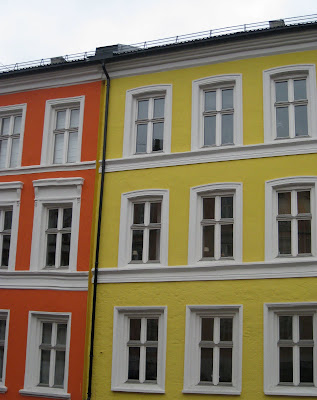 With a bright and yellow photo I'm wishing my readers a happy easter! I'm going on holiday today, so there will not be any posts until Sunday/Monday! See you then!
Posted by Adelheid at 14:59 No comments: 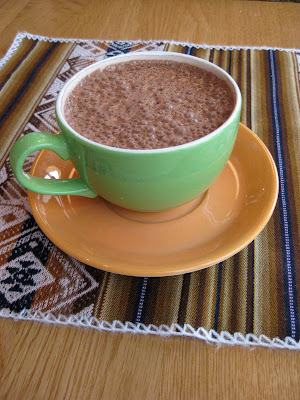 If you feel like a cup of something hot and yummi, but not the ordinary espresso, latte or green tea, go to Copa Con Oro and ask for a cacao de inferno. In Latin American inspired sourroundings they'll serve you a cup of hot and spicy cacao with chilli, so thick you could almost eat it with a spoon. www.copaconoro.no
Posted by Adelheid at 21:25 1 comment: 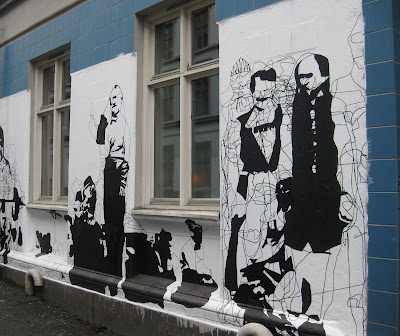 Walking past this wall painting in Jens Bjelkes gate, I was a little too quick to snatch my photo and continue walking. I kept walking, thinking I wouldn't have anything say about this piece of art, what it portrays, who's it by etc, except for the fact that I think it looks cool. Whilst taking a better look at the photo before posting it on this blog I noticed the writing on the bottom left side, saying "by ian dent." There it was! I'm posting the link to Ian Dent's web page, and for anyone who thinks this art looks cool, this web page is worth a look! www.iandent.net
Posted by Adelheid at 17:15 1 comment: 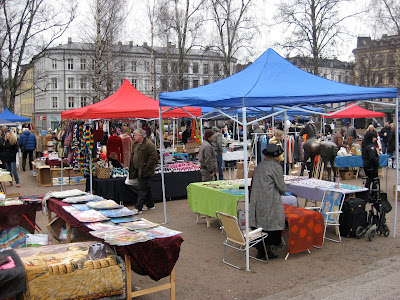 The perfect Sunday for me is when I wake up refreshed after a quiet Saturday evening, ready for a stroll around Oslo, stopping for a coffee somewhere and browsing through antique and second hand shops and markets. Today is one of those Sundays!! Today's post is a photo from the market held every Sunday from 12pm, in the park called Birkerlunden at Grünerløkka. I have been here many times, I love walking past the stands looking at all the things and trinkets people have for sale
Posted by Adelheid at 15:52 No comments: 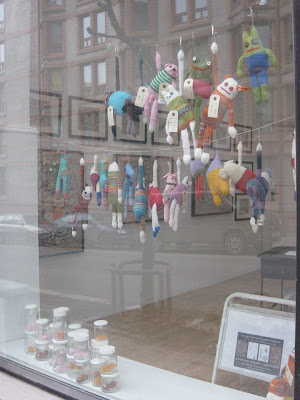 I have to admit that the blogs I follow on a daily basis are blogs written by very self-centered girls. And for some reason that's why I read them. Its brain-dead and funny, funny to se how they pose every day under the heading "today's outfit." These blogs were also the reason I wanted to start a blog that wasn't about me, my bad outfits and my boring life. Because I like to take photos, and because I came across this blog www.parisdailyphoto.com/ I decided I would start a blog with daily photos from Oslo. It started well, but the last few weeks I haven't been posting photos every day. I have been thinking I have lacked motivation, but I have realized that its a lack of creativity. The photo today is taken from a gallery here in Oslo, www.kan-skje.com/ where, until Sunday, a blogger called Vigdis Løbach is having an exhibition. Its when I look at blogs like hers I don't feel very creative: www.tegnelogg.blogspot.com/ and www.kunstkanskje.blogspot.com/
Posted by Adelheid at 23:53 1 comment: 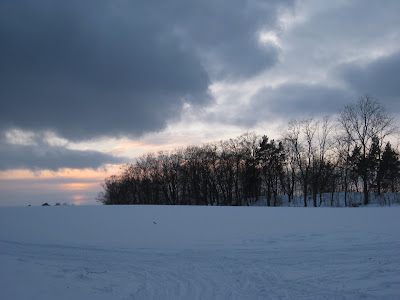 Taken about four weeks ago, when everything were still covered in snow. It's taken on a field at Bygdøy, the field covered with cross country skiing trails. What I like the most about this photo is the light. Some days in winter have the most beautiful twilights and sunsets
Posted by Adelheid at 22:39 No comments:

Today I chose to post this photo. I have already mentioned that I like to take photos of trees. Although this tree doesn't have that many long branches that tangle, I still like it. It's a quirky tree. This photo was taken, as you can see, whilst it still was snowy and the tree had no leaves. As soon as the leaves starts to grow I'll post another photo of it
Posted by Adelheid at 21:13 No comments: 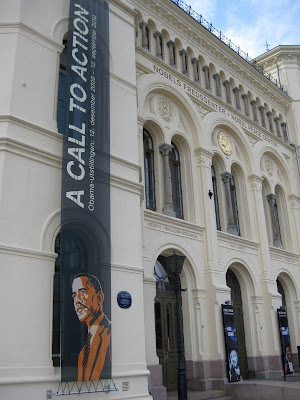 He was inaugurated as president of the United States on the 20th of January 2009. Only 8 months later, on the 9th of October, it was announced that he was the 2009 Nobel Peace Prize winner and since then the Nobel Peace Center at Aker Brygge have hosted the annual exhibition on the Peace Prize laureate. It's called "A Call to Action" and the connections between Alfred Nobel's will and Obama's work for peace are central in the exhibition. Read more on www.nobelpeacecenter.org
Today Obama signed the highly debated american healtcare bill. Some newspapers calles it history other says its Obama's first political triumph!
Posted by Adelheid at 21:02 No comments: 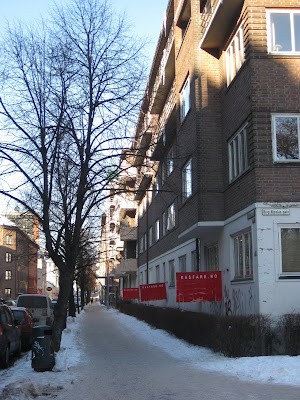 No, this is not pub signs. These red "flags" can be seen all around Oslo during winter, especially now when the temprature rise. Their job is to warn all pedestrians of the snow and ice on the roofs that come sliding off as miniature, but deadly avalanches. Its very scary and accidents do happen. In Australia they want you to swim between the flags, in Norway they want you to walk on the outside of them. In most places this means in the street. Not sure whats the saftest
Posted by Adelheid at 20:21 No comments: 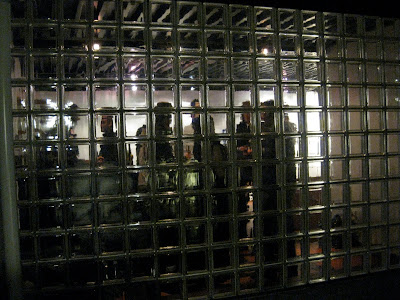 Yesterday I attended a birthday for Terje, my school institute's very first computer (yes, we are geeks). His age is irrelevant, what we care about is the chance to throw a big party. The party was held at Arkitektenes Hus (the architect's house), and I thought this would be a chance to get a good photo for today's post. I got a little disappointed as the house wasn't as impressive as I thought it would be. Anyways, this cool glass wall is seperating the bar and backyard, where we all spent most of our time!
Posted by Adelheid at 11:54 No comments: 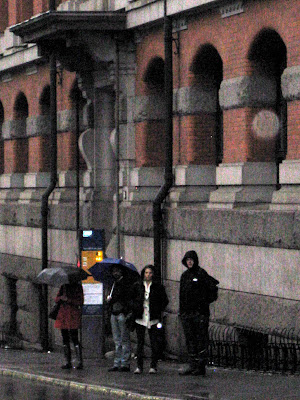 Today the winter is officially over. Today is the first day its raining since long before Christmas. And I like it, except for the fact that my shoe has a hole in it and I got wet
Posted by Adelheid at 16:40 No comments: 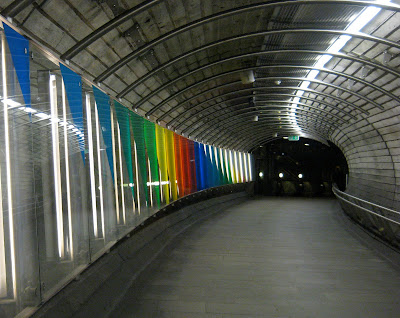 Another piece of art-work between the platforms and the street level at Nationaltheatret train station
Posted by Adelheid at 22:38 No comments: 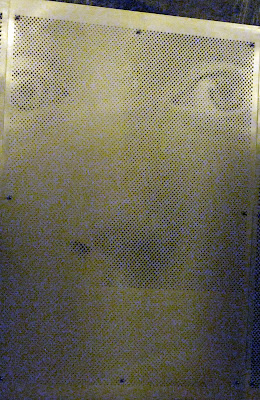 In 1999 the Nationaltheatret train station was extended with a second platform, and I have always been curios about the art-work exhibited on this platform. It contains of different pictures of people, mostly portraits. The surface of the canvas is a metallic shimmer which makes the faces appear and fade away as you walk past. It almost feels as if they follow you with their eyes. I have also wondered who the faces in the portraits belong to, as they make me think of photos from concentration camps.
The visual artist behind this exhibition is Anne-Karin Furnues. According to Galerie Anhava, Furunes has developed her own technique, perforating the acryllic painting on the canvas into numerous of holes in different sizes. As to the people in the portraits, Furunes uses archive photos which are of a political and historical nature.
Read more on www.anhava.com/exhibitons/furunes/index.html
Posted by Adelheid at 19:50 1 comment: 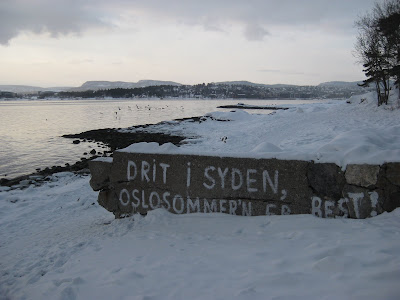 I rarely complain about the weather. I actually dare to say I love it all, whether it is raining non stop for 2 weeks mid-July or if it is -20 degrees and 1 meter of snow in February. With this said, I have to emphasize that what I'm now about to say is not complaining, but I am ready for spring to come to Oslo! The sun has been warming up the streets lately, and the smell of tarmac makes me happy!
Posted by Adelheid at 20:27 1 comment: 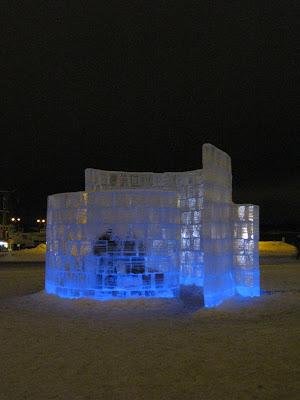 This is a photo I took a while back, thinking I would find out what this ice sculpture was all about. Never got around to it before it was melted. It made me think of the new Icebar in Oslo that opened last November. Maybe I'll go there for a refreshing drink when the weather gets warmer. Check out www.icebaroslo.no
Posted by Adelheid at 14:58 No comments: 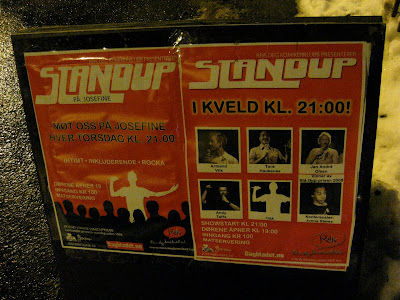 Every Thursday Josefine Vertshus at Majorstua arranges a comedy evening. I've never been a big fan of stand-up, but when one of my best mates started doing it a few years back I have become a regular. Check out www.josefine.no
Posted by Adelheid at 00:05 No comments: 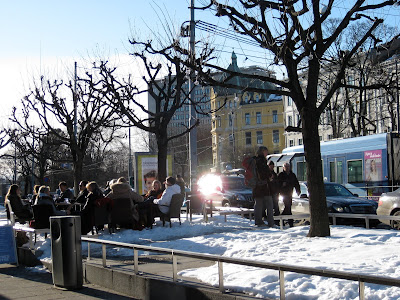 What a contrast from yesterday! Maybe spring is just around the corner? I know this is not the best photo, but I just had to blog it. As soon as the sun is shining, norwegians tend to do everything to get a little glimpse of it, even if it means putting out chairs and tables for the café guests to enjoy their coffee and lunch on the snow!
Posted by Adelheid at 22:07 No comments: 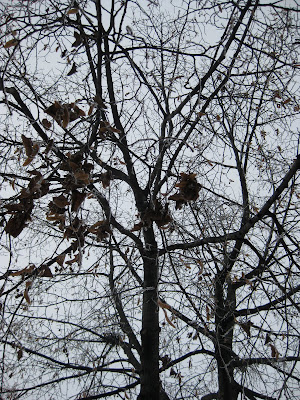 We're already into the second week in March, but it's still cold and snowing. The few leaves that didn't fall off the trees before winter were all covered with frost this morning
Posted by Adelheid at 19:28 1 comment: 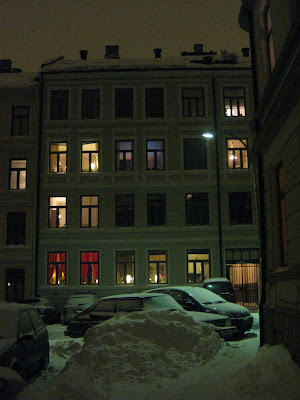 An Oslo backstreet by night!
Posted by Adelheid at 23:34 No comments: 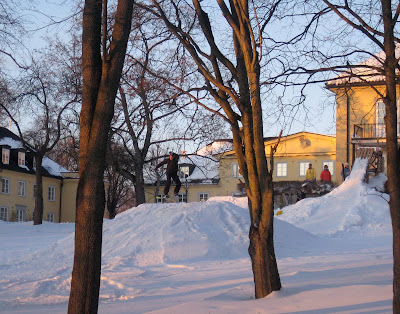 On my way home from university yesterday afternoon my attention got caught by these guys snowboarding in the university gardens. Pretty cool!
Posted by Adelheid at 18:52 No comments: 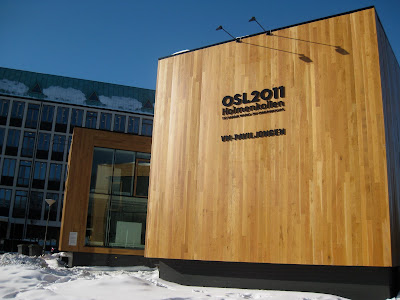 After about a year of building, the new Holmenkollen Ski Jump Arena is finished. Its official opening was tonight, and Norways best known female ski jumper, Anette Sagen, was chosen to be the one to make the first official jump in the hill. Only problem is that yesterday, the media managed to get a photo of one of Norways best male ski jumpers, Bjørn Einar Romøren, doing the very first test jump in the hill. I guess I only need to add this for my foreign readers (if I have any); As a result, all hell broke loose. However, I'm not gonna air my opinions on this case.
This re-building of Holmenkollen is done in connection with the world championship in ski jump that Oslo is hosting in 2011. Todays photo is not of the new ”kollen” but one of the temorary pavillion in the city centre, where the 2011 world championship is beeing planned and organised. The building is design by the same architecture company that designed Oslo Opera House, Snøhetta
Posted by Adelheid at 22:38 No comments: 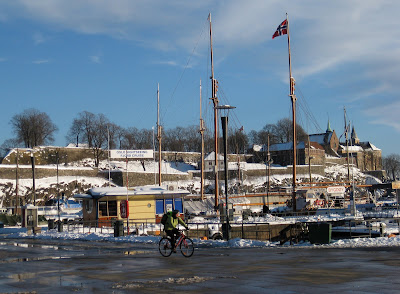 This bay in the Oslo Fjord is surrounded by Akershus Fortress, which you can see on the right in the background, Oslo City Hall and Square and Aker Brygge, a shopping and restaurant area. To most people this bay and jetty is known as Aker Brygge and/or Rådhusplassen (City Hall Square). However, this area is also called Pipervika, a name that is said to have derived from the military musicians, drummers and pipers (flutists) who were located in the area, especially around the fortress in the 19th century
Posted by Adelheid at 22:58 1 comment: 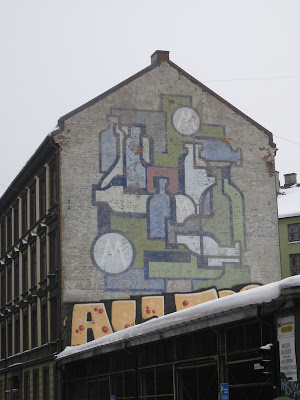 In Gamle Oslo (Oslo old town) there is a building with this painting on it. It must have been a dairy in the building or somewhere in the street many years ago. I like the look of the green and blue old milk bottles and the M might stand for meieri (dairy)
Posted by Adelheid at 22:56 No comments: