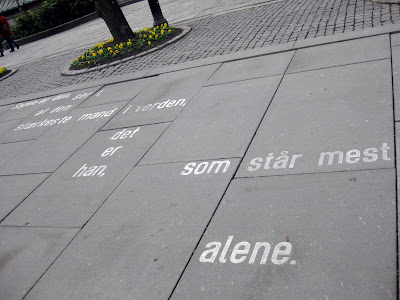 The very famous Norwegian playwriter and poet, Henrik Ibsen, lived his last years in Arbins gate, here in Oslo. In 2006, the hundred year anniversary of his death was celebrated in Norway. Amongst a lot of things happening, one of the more permanent celebrations was the art project Ibsen Sitat (Ibsen Quote) by the Ibsen Foundation, www.ibsen-foundation.org This project took to engrave quotes from Ibsen’s plays and poetry into the pavement, all the way from Ibsen’s old flat in Arbins gate, along his daily route to the Grand Café in Karl Johan. As a way to involve people in this project, Ibsen Foundation opened up for everyone to choose their favourite quote and tell why they like it. Then the they would pick out the quotes that would be engraved. Today’s photo is of one of the quotes I really like: ”Sagen er den, ser I, at den stærkeste mand i verden, det er han som står mest alene” Translated, this would be something like: ”The fact is, as I see it, that the strongest man in the world, is he who stands most alone” This quote is from ”En Folkefiende,” one of Ibsen’s plays, and was sent in by by Marthe Abrahamsen. Here is her story behind the quote. Read more about the project at www.ibsen-foundation.org and www.ibsensitat.no
Posted by Adelheid at 15:15