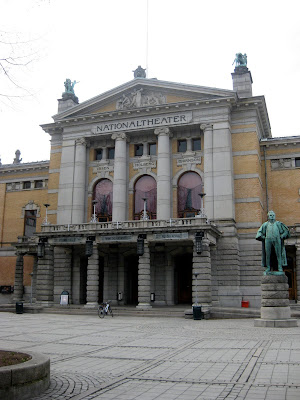 Today's photo is of Nationaltheatret, our National Theatre, that opened in 1899. The bulding, designed by the architect Henrik Bull, is situated in the centre of Oslo, close to Karl Johan and the Royal Palace. In 1983, the bulding was protected by the Cultural Heritage Act. The theatre houses three stages, Hovedscenen, Amfiscenen and Malersalen. An external scene, Torshovteatret, situated in the suburb of Torshov, is the theatre's forth scene. The National Theatre's ensemble is the leading ensemble in Norway, and only the very best, nationally and internationally, are invited to realize the artistic program. At the time being, these are some of the plays on the National Theatre's repertoire; Ingmar Bergman's Fanny & Alexander, William Golding's Fluenes Herre (Lord of the flies), Henrik Ibsen's Et dukkehjem and Bertolt Brecht's Galileo. For more information, check out nationaltheatret.no
Posted by Adelheid at 22:32